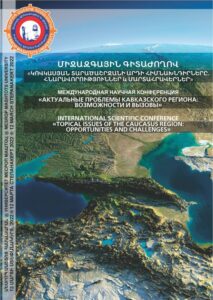 We, the participants of the international scientific conference “Topical Issues of the Caucasus region: Opportunities and Challenges” held at Mesrop Mashtots University, making a joint statement, aim to draw the attention of the international community to the situation in the Republic of Artsakh and those territories of the Republic of Artsakh, which have been occupied by Azerbaijan.

This is to state that:

Azerbaijan has in no way renounced the theoretical and practical expressions of its anti-Armenian policy. The actions carried out by Azerbaijan at the state level are aimed at evicting Armenians from the Republic of Artsakh and, at the first opportunity, ethnic cleansing.

Taking into account the realities, we, the representatives of the scientific community, call on the international community to use all the possible levers to curb Azerbaijan’s state terrorism policy. We urge the OSCE Minsk Group Co-Chairs to restart the process of the Azerbaijani-Karabakh conflict settlement on the basis of their own principles. There is no alternative to the realization of the right of the people of the Republic of Artsakh to self-determination.